FROM THE DEPARTMENT HEAD 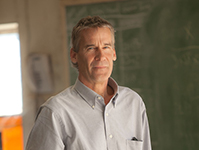 Now, aren’t these interesting times!? When the shelter-in-place order was first instituted, it seemed as if we had just crossed over into “The Twilight Zone,” however, with the highways and city streets so quiet and empty it was more like we were in a a scene from “The Walking Dead.”

I learned how to use Zoom and Canvas (Cal Poly’s new learning management system); I learned how to make MP4 movies out of Powerpoint presentations and make my phone a “hot spot” so that I could work anywhere.

Problem was, there was nowhere to go.  Perhaps my living room will be nice today. That blissful feeling of having the planet to one’s self lasted about a week, when suddenly it hit: the reality that we were all going to have to live life virtually.

That meant scheduling every normal human interaction in a Zoom meeting. It also meant that all classes were to become lessons that would air sometime on television or on a computer screen later.

It has been extremely disconcerting to not be able to see the faces of students as I lecture. I hadn’t realized how important personal interaction was for me as an indicator that students are “getting it.”  I’m sure that I am not alone in this.

The one thing for which I am eternally grateful is that I am still able to work. On television I see the countless throngs lined up at the unemployment offices around the country, and my heart sinks. I also see in the media -- and even in the streets of San Luis Obispo -- the social unrest associated with racism. My heart sinks further.

I attended a high school in Hayward, California, that was relatively racially diverse among the white, Hispanic and Black populations. There, I witnessed the grand unifying forces of music, where I played saxophone in the jazz band, and in sports, where I ran the mile in track. Both music and sports were well represented by different racial groups. It seemed that there were more important things to worry about than how different we were from each other when we had some contest to fight, some other challenger to take on. Often those differences are what gave our “team” the completeness to win those contests. You couldn’t just win a track championship with just a miler, just as you couldn’t win it with just a sprinter. You couldn’t win a jazz contest with just a saxophone, just like you couldn’t do it with just a piano.

It is my grand hope that we, as a society, will begin to act more as a “team” to take on the common challenges that face us. Oh, and they are big ones. Socio-economic imbalances. COVID-19. The climate crisis. Racial injustice. And let’s not forget about growing food for a hungry planet!

That’s where we, as a department and a program, come in. We will continue to educate graduates who can grow food, fiber and beautiful plants, as well as shine some light on the vexing problems associated with those other big challenges I mentioned above. We just went through a program review and received recommendations from our site visit team (which, of course, was virtual). Combining their recommendations with our self-assessment, we will devise an action plan that will guide us for the next several years in improving our mission of training qualified graduates. You will hear and read more about this plan in the coming months. One of those actions will be to see where horticulture and crop sciences fit in with the real world of agriculture. Identifying the trends, such as where the next generation of jobs will be, growing plants in controlled environments and indoor foliage for the urban sector, and expanding organic systems while retaining all those areas that made us worthwhile.

Be on the lookout for these changes, because we will provide an avenue for your input. Afterall, you, the readers of this newsletter, are among our most valuable assets.