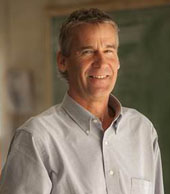 Department Head
Dr. Steinmaus received a BS in Plant Science/Plant Pathology and a PhD in Plant Biology from the University of California at Davis. He worked as a Staff Research Associate in the Weed Science program while a graduate student at UCD. He was a National Research Initiative USDA Postdoc Fellow Plant Physiologist at University of California Riverside in the Botany and Plant Science Department. He joined the Horticulture and Crop Science Department at Cal Poly in 1999 and moved into the Biological Sciences Department in 2005 before returning in 2014 to HCS as department head. His area of teaching and research is weed science as it pertains to weeds in agriculture and invasive plants in wild lands. 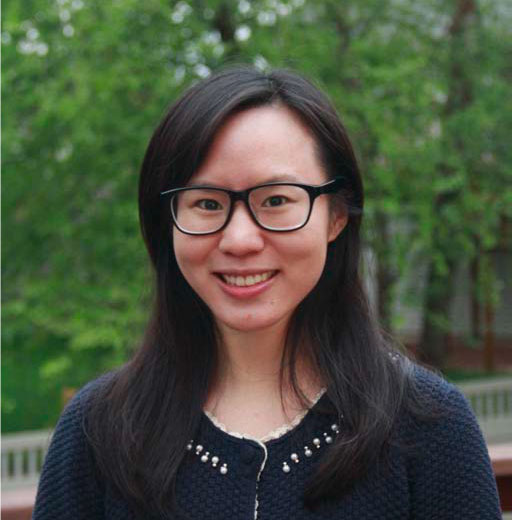 Assistant Professor in Wine and Viticulture and Plant Sciences
Dr. Ding is an Assistant Professor of Plant pathology with a joint appointment in the Wine and Viticulture and Horticulture and Crop Science Departments. She received her B.S. in Biological Sciences in the School of Life Science, Henan University, China and her M.Phil. in Microbiology in the School of Biological Sciences, The University of Hong Kong. She earned a Ph.D. in Plant Pathology from the University of Wisconsin-Madison, where she worked on potato early blight and brown spot disease. Dr. Ding teaches courses that involve plant pathology, grapevine diseases, and plant disease management. Her research interests include studying fungicide resistance in grapevine pathogens, grapevine disease diagnosis and epidemiology, and testing sources of disease resistance in grapes. She is also interested in working to increase the sustainability of wine grape production. 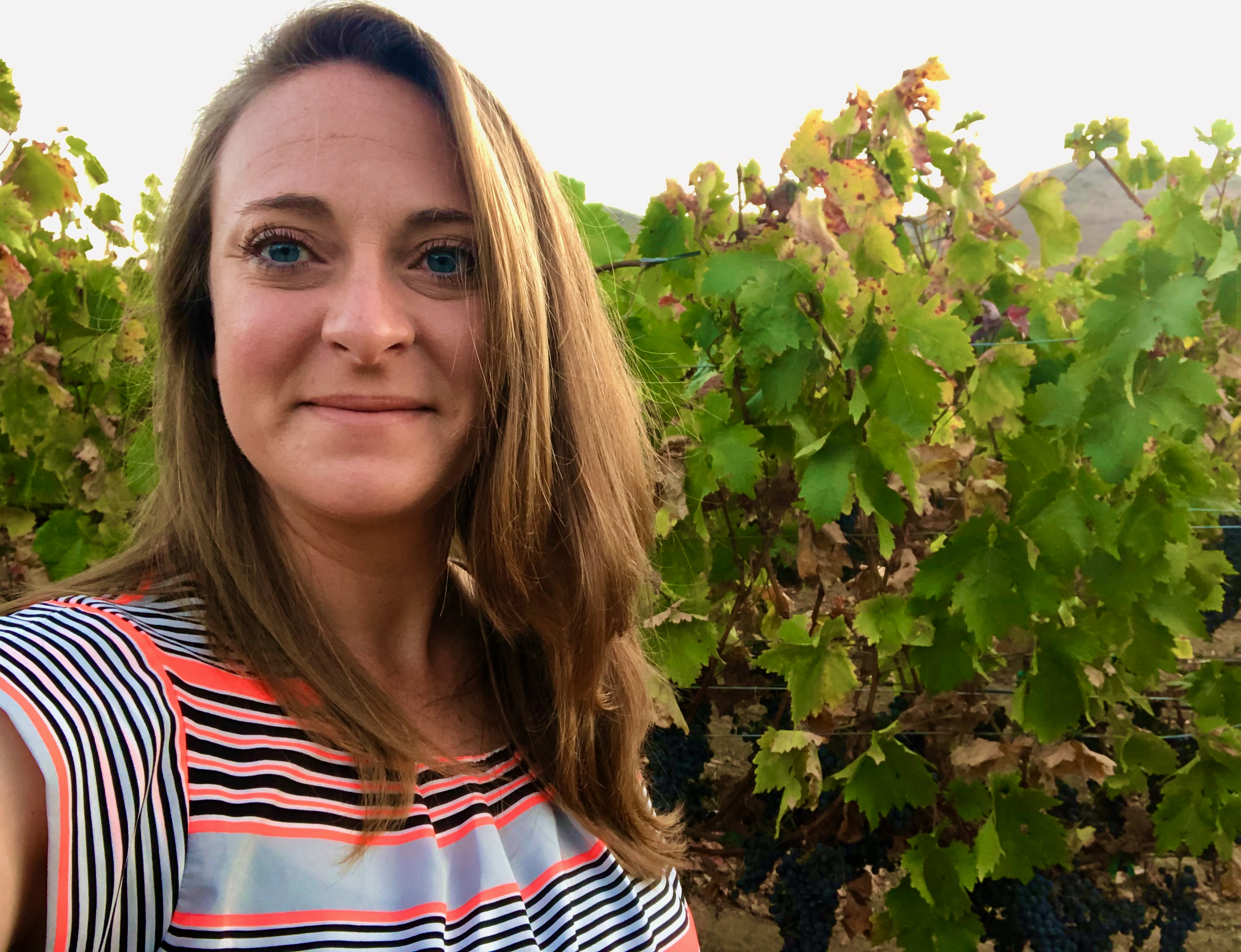 Associate Professor in Plant Sciences and Wine and Viticulture
Dr. Dodson Peterson earned her undergraduate degree from the University of California, Davis in Viticulture and Enology with a minor in Managerial Economics in 2009.  She continued at UC Davis, earning her M.S. and Ph.D. in Horticulture and Agronomy in 2012 and 2014 respectively.  Her research program strives to advance the understanding of grapevine physiology, rootstock-scion interactions, rootstock selection and vine performance factors. Her research mission is to execute innovative and inspiring researching that advances the wine and viticulture industry and scientific community.  She has been awarded the Panhellenic Award for Excellence in Education and the Terrance Harris Award for Excellence in Mentorship.  Dr. Dodson Peterson also received her Certification in Effective College Instruction from the Association of College and University Educators and the American Council on Education in 2021. 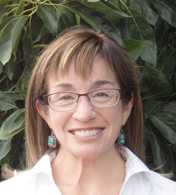 Professor
Dr. Garner teaches classes in Fruit Science, including Pomology I and II, Nut Crop Production, Citrus and Avocado Fruit Production, and Orchard and Vegetable Enterprise Project, in addition to teaching Principles of Horticulture and Crop Science. She earned her Master's degree from Cornell University and her PhD from UC Riverside. Her research interests include whole-plant physiology, plant growth regulators, and the development of cultural methods to increase crop production, with her current efforts focused on avocado pomegranate production. Dr. Garner is the faculty supervisor of the Cal Poly orchards. 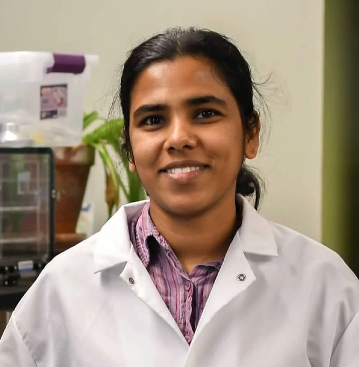 Assistant Professor in Plant Sciences and Strawberry Pathologist with the Strawberry Center
Dr. Hewavitharana received her B.S. in Plant Biotechnology at the University of Colombo, in Sri Lanka. She obtained her M.S. in Plant Pathology and her Ph.D. in Plant Pathology from Washington State University. Dr. Hewavitharana's last position was as a postdoctoral research associate working under Dr. Mark Mazzola at USDA-ARS and Tianna DuPont at Washington State University's Tree Fruit Research and Extension Center. Her research involved application of bio-renovation methods of anaerobic soil disinfestation and Brassicaceae seed meal application to control apple replant disease. Her research program at Cal Poly focuses on integrated management of both current and emerging disease threats to California's strawberry industry. 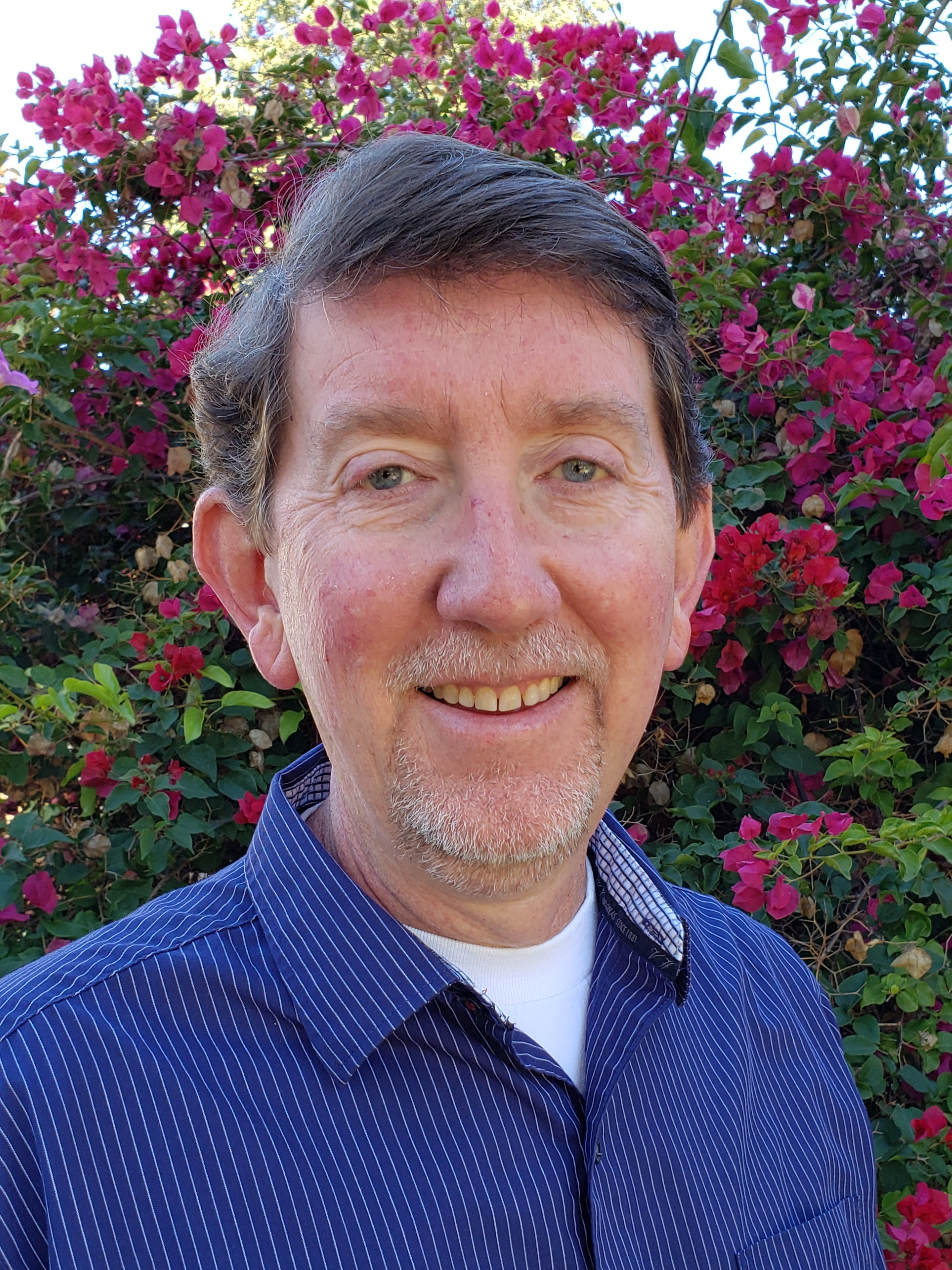 Professor
Dr. Headrick teaches Agricultural Entomology, Biological Control of Agricultural Pests, Vertebrate Pest Management and Insect Pest Management in the Plant Protection Science concentration. He earned his PhD from UC Riverside where he studied biological control of weeds and became a specialist in tephritid fruit fly ecology and behavior. His research on this agriculturally important group and other research has resulted in more than 100 published articles, book chapters and technical reports. He was the recipient of the 2010 College of Agriculture, Food and Environmental Sciences Outstanding Researcher Award and conducts research on insect pest management in vegetable, citrus and greenhouse cropping systems. He has given over 100 research-related presentations nationally and internationally. 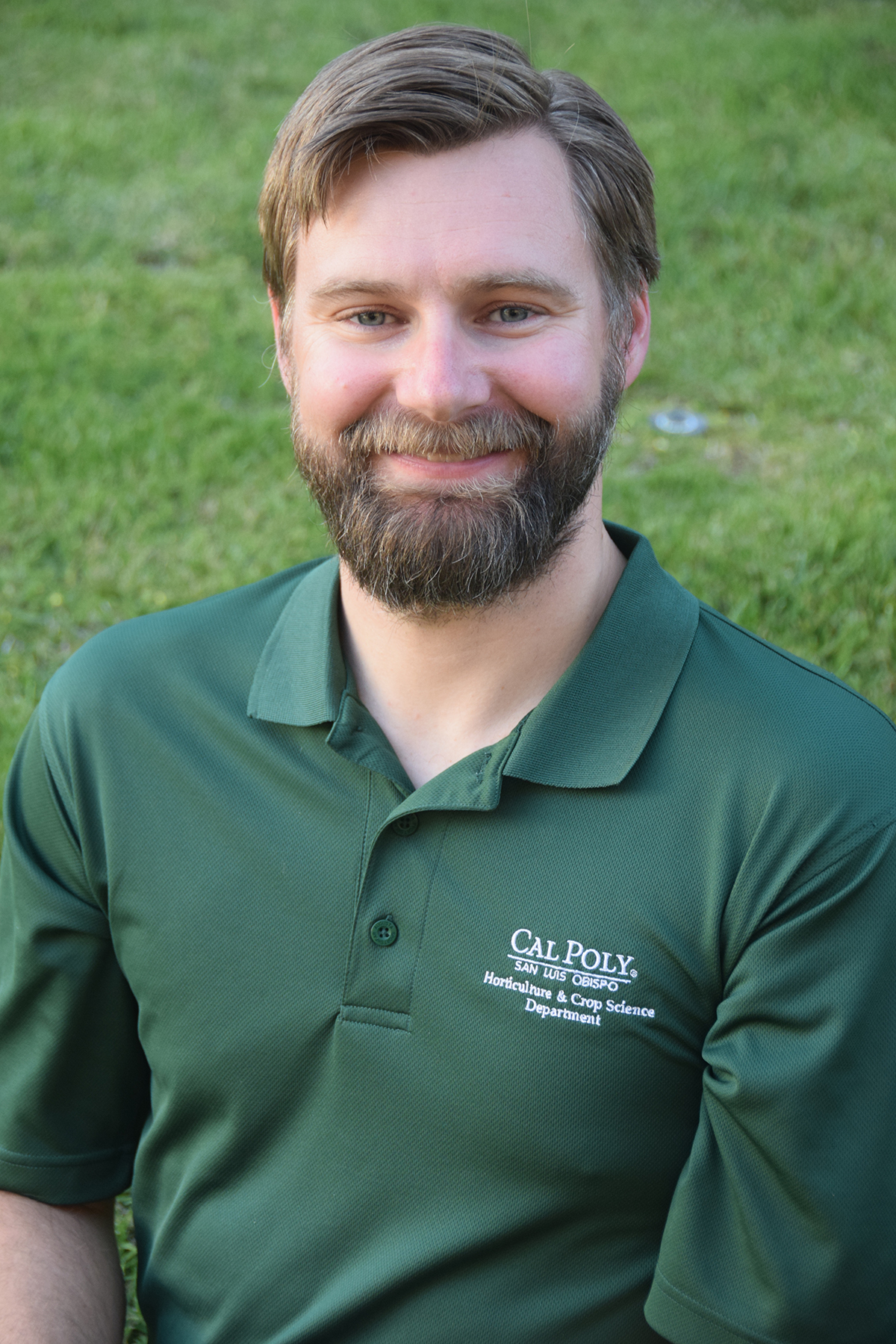 Associate Professor
Dr. Hoover is an Associate Professor of Sustainable Nursery Production. He worked in the nursery industry for a decade, growing and selling plants in wholesale and retail environments. Dr. Hoover earned a B.S. in horticulture from Temple University and an M.S. and Ph.D. in horticulture from Penn State University. His research interests include propagation substrates, nursery production methods, and landscape plant selection. He teaches Plant Propagation, Nursery Production, Horticultural Production Techniques, Plant Materials I and II, Experimental Techniques and Analysis, and the Tomato Spectacular Enterprise Project. Dr. Hoover is the head coach for the Cal Poly National Collegiate Landscape Competition team. He is a member of the American Society for Horticultural Science, the International Plant Propagators' Society Western Region, and the Plant California Alliance. 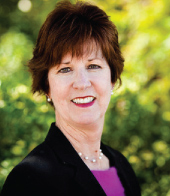 Lecturer
Melinda Lynch AIFD CFD is a Cal Poly Alumna, she teaches our floral design classes offered in our department. She teaches summer courses to the California Ag. Education Teachers. She is the advisor to the (SAIFD) Gordon Student Chapter of (AIFD) American Institute of Floral Designers. She coaches the National Floral Design team for SAIFD, they compete at the State and National levels. She is currently the Co-Chair for the Student Membership/AIR and a member of Certification Committee on the National Board of Committees in AIFD. She was inducted in AIFD in 2002 and is also a Certified Floral Designer with AIFD. 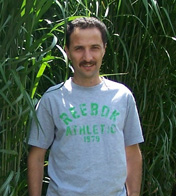 Associate Professor
Dr. Tubeileh joined the HCS Department in Fall, 2015. He is teaching classes in Organic Farm Production, Cropping Systems, Commercial Seed Production and is the faculty supervisor of the Department's Organic Farm, where he supervises students working as members of the Organic Enterprise project. He also helps to oversee the College's Sustainable Agriculture minor. Dr. Tubeileh obtained a Ph.D. in Agronomy from the Universit? de Lorraine in France in 2000. He worked as a postdoctoral fellow at the International Center for Agricultural Research in the Dry Areas (ICARDA) between 2001 and 2007. At ICARDA, Dr. Tubeileh contributed to the implementation of development-oriented research in close collaboration with staff from national, international and non-governmental institutions both in developing regions (Middle-east and North Africa, South Asia, Sub-Saharan Africa) and in developed countries. Dr. Tubeileh was previously at the University of Guelph in Ontario, Canada where he managed 14 research projects involving field, vegetable, and biomass crops. Dr. Tubeileh has more than 50 scientific publications. 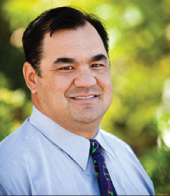 Professor
Dr. Wong is teaching an introductory class and laboratory in genetics and is currently conducting genetic research with Stanford University. "The techniques and experimental approach I use can be applied to many plant species. Crop and vegetable species grown on the Central Coast could be used to prove the link between the basic science concepts and the field application," Wong explains. He also wants to design and teach a laboratory techniques class. The course would use the newest technologies to differentiate plant DNA to help select genes that would provide the best plant types for cultivation. 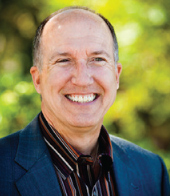 Professor, emeritus
Dr. Brown has taught in the Horticulture and Crop Science Department for 30 years. He came to Cal Poly from LSU via Cornell after spending 7 years training as a postharvest technologist/physiologist. He currently teaches the course Postharvest Technology of Horticulture Crops and assists with the course, California Vegetable Production. Dr. Brown's research interests center on pre-cut fruits and vegetables, plastics and modified-atmosphere packaging. Over the last 15 years, he has conducted studies involving broccoli and cauliflower florets; sliced green onions; pre-cut artichokes, sweet potatoes, apples and lemons; whole strawberries; pre-cut pineapple; chopped cilantro and whole herbs. His research on antibrowning compounds for pre- cut produce has resulted in a recently conferred patent. His current research involves evaluating transit and retail temperatures for pre-cut leafy greens, characterizing and testing biodegradable films for packaging, evaluating migrants from plastics due to sealing or during microwaving, evaluating plastics for heavy metal content, and determining the potential migration of heavy metals from plastics during the storage and microwaving of pre-cut products. Dr. Brown was designated the Outstanding Faculty Researcher by the College of Agriculture, Food and Environmental Sciences for 2013-14, and has been named a University Distinguished Scholar for 2014-15. He was the faculty advisor for Cal Poly's anime club, Minna no Anime.
wbrown@calpoly.edu